The Good, The Bad, and The Unknown: Oregon State Edition 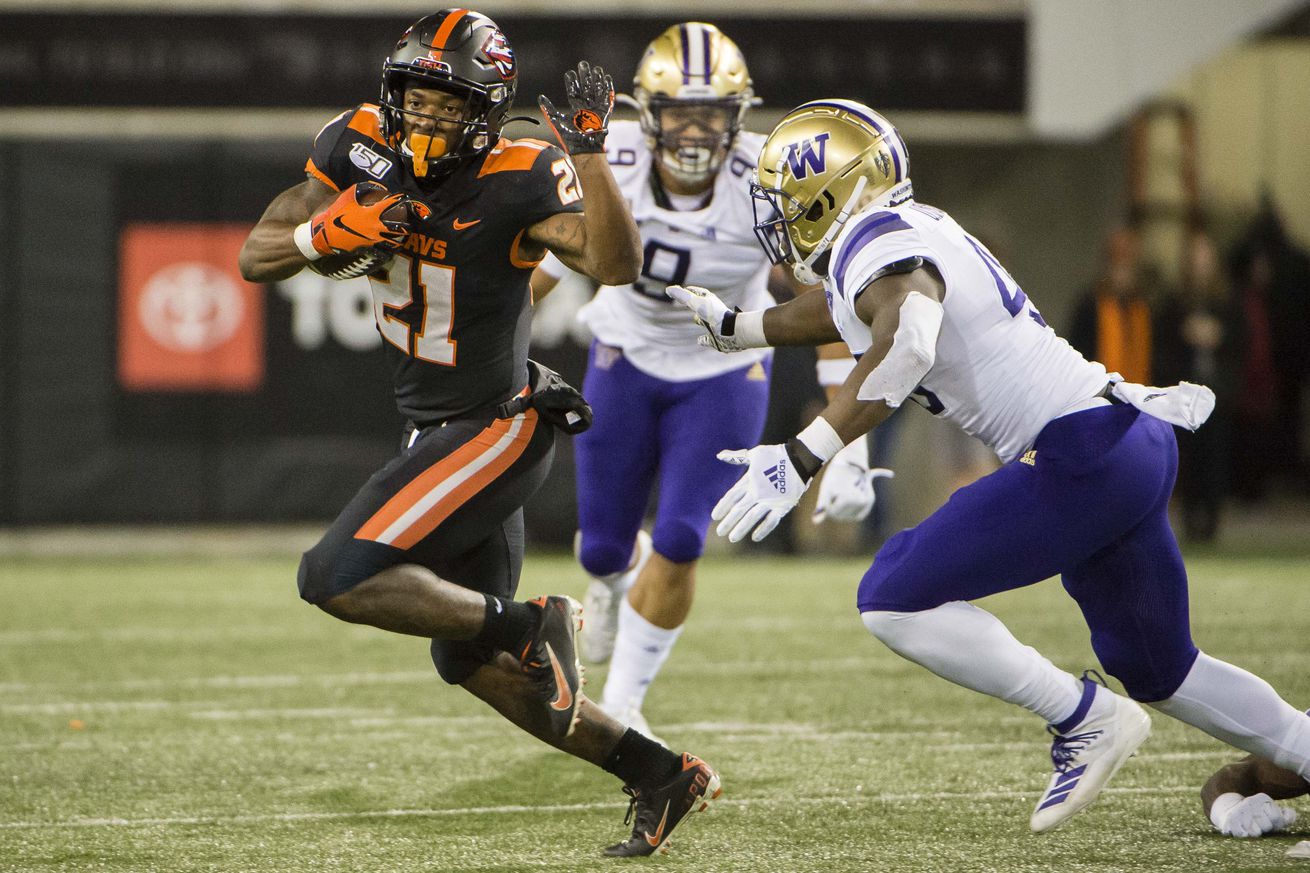 The defense. Oregon State went one for 13 on third downs. OSU only ran five plays in Washington territory, the deepest of which was on the the 37-yard line. Washington held OSU to 119 total yards of offense. That is a dominating defensive performance! That’s the least amount of yards the Huskies have given up in a Pac-12 road game since 1991. The defense also pitched a shutout against the Beaver’s offense, although a Jacob Eason pick-six let them sneak onto the scoreboard.

The secondary across the board had a great game, limiting OSU QB Jake Luton to 88 passing yards. A special kudos goes to Elijah Molden for his pick near the end of the first half:

Jake Luton throws just his 2nd INT of the year to give @UW_Football the ball just before halftime. pic.twitter.com/hbxNrg3vhW

Edefuan Ulofoshio the redshirt freshman walk-on linebacker continues to make a name for himself. “Eddy” finished the game with a team high nine tackles, as well as 1.5 sacks, and 1.5 TFLs. He and fellow redshirt freshman linebacker Jackson Sirmon played a majority of snaps at ILB against OSU and brought an effective and physical performance to the game.

Joe Tryon had his best game as a Husky. At 6’5” with arms the length of legs, Tryon is a physical specimen that coaches and fans alike have been waiting to see go off. He’s flashed his potential on and off the last season and a half, but on Friday he put on a dominant performance. He ended the night with seven tackles, two sacks, and 4.5 TFLs. Without taking too much credit away from him, this performance did come against a mediocre Oregon State offensive line and we’ll need to see more consistency from him moving forward. But regardless, this was a great showing and hopefully just an example of what’s to come for the third-year sophomore.

The running game. Salvon Ahmed had a fantastic game, rushing for 174 yards with an average of 7 yards per carry and two touchdowns. Combined with Richard Newton and three other ball carries who combined for four total carries, Washington rushed for 245 yards on 48 carries. The offensive line blocked very well tonight, opening up some large holes for Ahmed in the second half. Ahmed gets some extra credit in this game for running through several tackles and playing with a more physical running style than we have seen from him in the past. Perhaps it can be attributed to the return of Newton, whose running style could be described as “violent” and may have rubbed off on Ahmed.

Hunter Bryant. Despite making what was nearly Washington’s best offensive play of the game (it was still very good), Bryant ultimately had a disappointing day. He had at least four dropped passes and was only able to haul in five of his 12 targets. A couple of those incompletions were balls that Eason overthrew, but overall Bryant looked remarkably inconsistent on Friday.

Jacob Eason. It might not be entirely fair to claim that Eason belongs exclusively in the bad category for this game. He did some good things and the insane number of drops from his receivers (a season long issue) certainly negatively impacted his numbers and overall performance. But, his two interceptions were avoidable and he overthrew guys a number of times. He ended the night with 175 passing yards while completing just 50% of his 32 pass attempts, well below his season average. It’s likely that this is more than just an Eason issue, as Washington’s general passing game has been a problem all season long.

Coming into the game, Peyton Henry was a perfect 16/16 on field goals this season. However, he only made two of his four field goal attempts on Friday, and one of those field goals comes with a bit of an asterisk. OSU had a defensive holding penalty on a field goal that Henry initially missed, giving him a second chance to hit it, which he did.

Clock management! This is maybe the fourth time this season there has been a glaring head scratcher of a decision in regards to clock management. While this one ultimately had limited negative implications for the final outcome of the game, if things had ended differently, it would have been a much bigger issue. Specifically, at the end of the first half with time winding down, Washington had one timeout left with eight seconds on the clock on OSU’s 11 yard line. But instead of using their timeout, Washington decided to spike the ball when the clock was down to four seconds. They ultimately wasted an opportunity to take one more shot at the endzone and instead ended up missing a field goal to end the half.

So what’s up with Ty Jones? He played in his first game of the year and saw five snaps, but didn’t get a target. Presumably the coaching staff is easing him back into things. Given the new redshirt rules, Jones can play in the final two regular season games and the bowl game, while still maintaining his redshirt.

Sean McGrew? It appears that McGrew is still recovering from a lingering injury. After getting a pretty regular workload as the number two or three back in the first half of the season, he was sidelined for the past few games. He saw action on special teams against Oregon State, but didn’t have a single carry.

ILB Brandon Wellington appears to have suffered a head injury in the first half of the OSU game and was seen wearing street clothes on the sidelines in the second half. He’s presumably under concussion protocol and will be week-to-week moving forward. Does this mean that Ulofoshio and Sirmon will be the two starting inside linebackers next week? We’ll see what the coaching staff does with Kyler Manu, but it’s looking like a strong possibility.

This story originally posted at https://www.uwdawgpound.com/2019/11/12/20957989/the-good-the-bad-and-the-unknown-oregon-state-edition-washington-husky-football by College BattleGround.